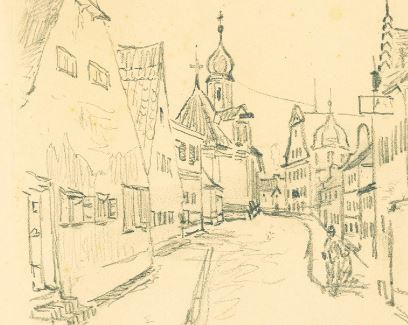 EKAN recently inspected a mid-century house in Lower Gibsons with a standout water view of the harbour. In fact, when doing the roof inspection, we had to pause to appreciate the roof-top vista as it was likely the best view on the block. Unfortunately, only roofers or an inspector will ever be ‘on location’ to appreciate it.

In this particular house, there was a vaulted ceiling in the living room, dining room and kitchen areas. It was a nice feature and made the 1000 sq ft floor area appear much more open and complemented well the ocean view.

As can be seen from the above Scheibenzuber watercolour, vaulted ceilings are very common in Europe. In correspondence with a museum, it was noted that this work was likely painted between 1910 and 1940. There, space is a premium and an attic is used as an additional living area or at least open for better interior lighting. You can tell by the windows in the gable ends of the houses

However in Gibsons, a 1000 sq ft house, in that neighbourhood, with the style of the day, considering comparable properties along the street… it likely would have been built with a flat ceiling.

So either the vaulted ceiling was an ‘avant garde’ feature by the original builder or the ceiling was modified from flat to vaulted in a more recent renovation. But why should we care? Let’s look at the below figure:

In order to create an open ceiling, the ceiling joists are removed. Obviously then, other structural elements of the roof and perimeter collar beams need to be strengthened.

So how can we advise the prospective buyer? First, it will be worthwhile to check with the town’s planning department. There may be on-file the original building plans or an engineer’s report to substantiate a changed ceiling plan.

If there are no old records, then an examination of the attic space may shed some light. In particular, there will be a transition in timber framing methods between the flat and vaulted roof areas. Are there any recent cuts in the ridge beam or purlins? What about newer wood framing? Old lumber does have a patina. Cuts and new lumber do show up well.

Finally, a further inspection of the interior and exterior perimeter walls should performed. We look specifically for signs of movement or separation, especially at the corners.

In summary, a house feature, such as a vaulted ceiling, should always be considered if was age and neighbourhood appropriate. If it is suspect, then we inspect the interior and exterior walls for signs of movement and the roof line for any signs of sagging.