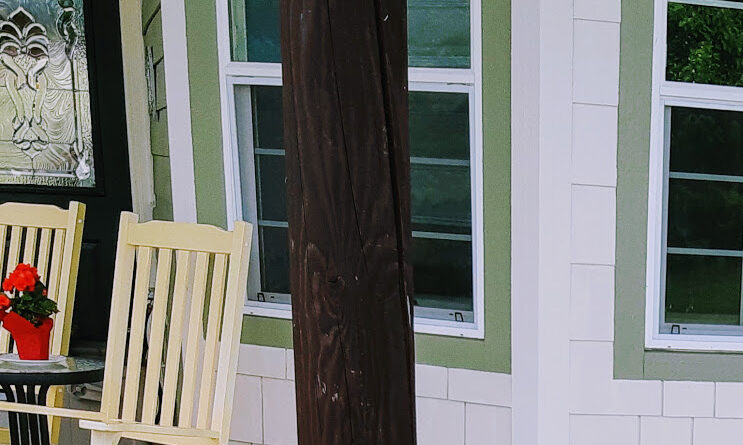 Photo: Note the spiral log split in the wooden column. There was no indication of movement, bowing or rot. But is the post accepable?

An under 20 year old home was inspected in West Sechelt. Overall it was in good condition and built to a better than average standard.

The front porch had an overhang which was supported by multiple wooden posts. All the posts had splitting or ‘checking’. The question was whether or not it was a serious issue.

Overhead loading can cause a wood post to split and would indicate a potential problem. In this case, the splits or cracks in wooden posts were due to shrinkage as the wood dried, because they occured along the grain.

The wood grain had split up to 0.5 inches wide and in some cases over 2 inches deep and up to 3 feet long. As the post was an 8 inch diameter log, there was still adequate support.

Except for one issue.

The wood grains had split in a spiral pattern, as opposed to vertically up the post. Vertical splits are usually structurally acceptable, as long as neither the base or top surfaces are damaged or loosened. In a spiral pattern, we were concerned about the post behaving as if it was made up of two wedges that may be able to slide across each other.

In a case like this, we advised the buyer seek a professional opinion from a structural engineer to determine the cracks’ severity and any needed mitigating measures.